Many of us spend a whole lot of time not being happy with ourselves and our current situations. We we always think there is somewhere else we should be at this point in our lives and would have a lot less stress if we learned to embrace who we are and where we are right now. We would have a lot less stress also if we learned to let go instead of trying to control situations and other people.

How much of our energy is spent beating up on ourselves or trying to make an outcome turnout in our favor or stop someone from doing something that really isn’t in our control?

I have to admit that during certain parts of my life I wasted a lot of energy trying to control the future, trying to control other people’s behaviors and even emotions. I went to great lengths to keep people from getting mad, to keep people from leaving or to get people to be who I wanted them to be. It was exhausting and robbing me of my sanity, but during those times, I thought it was keeping me sane. I thought it was keeping my world balanced, but in reality it was destroying certain parts of myself and my life.

A lot of the desire to control outcomes and people come from us not trusting that things will eventually workout in our favor. Some people will call it not having faith in God or the Universe, therefore we try to take control over things that are really out of control. I’m not talking about sitting back and not taking action in your life and just hoping things will happen by happenstance, but I am talking about not worrying excessively over whether you’re going to get the job you interviewed for when you’ve already interviewed and given it your all. I am talking about not worrying whether or not your friend will be mad when you let her know you can’t lend her $20 because you barely have $20 yourself.

We all have our own way of trying to keep our world in balance, especially when we don’t trust that things will be okay no matter what and that the Universe, for the most part, is working for our good. What we have to learn, what I am still learning, is that life is good right now. That everything that is happening right now is just the way it is supposed to be. That where I am right now is where I am supposed to be. I am not behind, I am not trying to play catch up to this other me that is living a better life, and I have not missed out on some magical opportunity that will never come back. I am exactly where I am supposed to be right now.

Realizing that and letting go of trying to control every little thing frees us from our past. Who we were back then and what we did back then was just fine for back then. Who we are at this moment is also just fine for right now. Once we stop trying to control circumstances and people, once we stop beating up on ourselves for not being better, we will realize how much control we actually have over ourselves, our thoughts, our emotions and our present moment. We all want to be better, to be happy, to grow, but sometimes we have to enjoy life as it is today and just be and realize that where we are and who we are right now is good enough for today. 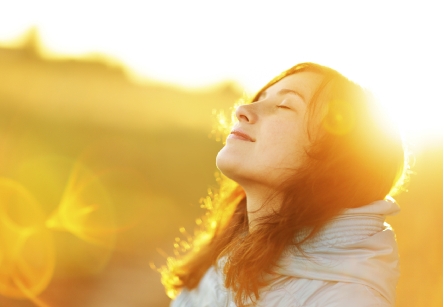 As a mental health professional, I have found myself spending a lot of time trying to convince people that they need to take care of themselves mentally and emotionally. Meaning, I run into people who are working two jobs, taking care of their family and everyone else around them, but are letting themselves go mentally and are getting sicker and sicker over time.

Or, I meet someone who is obviously not dealing with various issues in their lives, probably hoping that ignoring them will make them go away, but all the while they are growing emotionally unhealthy.

It reminds me of when a parent would bring a child in to see me for therapy and it would become apparent pretty quickly that it’s the parent that needs therapy, not the the child. Many times the parent would like at me as if I was crazy. They couldn’t see that their own neurotic behavior, substance abuse or even past childhood issues are creating the “problem” they are prescribing to their child.

I have a sister who at one point was working a very demanding job, raising a challenging teenager on her own,  volunteering her sparse free time to multiple organizations and if that wasn’t enough, she was trying to help every friend that called and needed something from her.

On the outside she looked ambitious, energetic, like a true type A-personality. On the inside she was feeling overwhelmed, flustered and fragile.

One night, while having dinner with our family which should have been relaxing, seemingly out of the blue she had what some would call a nervous breakdown. She started crying, hyperventilating and felt as though she was going to lose control of her mind. I could look at her and tell she was having a classic panic attack, but she was too far gone to hear me and was convinced she needed medical attention.

Soon afterwards she was diagnosed with an anxiety disorder and was told to cut back on the million and one things she did in her day to day life to take care of other people and to start taking care of her own mental health, something many of us don’t do enough of.

Sometimes I even catch myself too caught up in work, life and everything else and before I realize it I am dealing with some type of anxiety, insecurity or dysthmia. I have to slow down, stop myself and figure out a) where is it coming from and b) how do I take care of it. Often times for me the solution is simple awareness and acknowledgement that something is bothering me. Other times it takes journaling, reading something inspirational or processing my feelings with someone I trust. I’m usually that person for everyone, but sometimes I need someone to be that person for me.

It doesn’t always have to be something major and it doesn’t always take a therapist, but sometimes it does. Sometimes it’s simple mindfulness, meditation, or getting out and having some fun, but many of us have no real idea of what it means to administer emotional first aid to ourselves which is why I included this Ted Talk by Guy Winch: Why We All Need To Practice Emotional First Aid

In the first six months of the year, nationwide police have shot and killed 462 people. Out of those 462 people, 123 of them were in the midst of a mental or emotional crisis according to a Washington post analysis.

To be fair, most of these individuals were armed, but mostly with weapons less lethal than a firearm such as toy guns, knives or a machete. Only 3 officers have been killed by a knife or machete in the past decade according to the FBI.

Below I have included a video of a mentally ill man shot and killed by police only seconds after they arrive on the scene. The mans mother called because her mentally ill son was acting erratic. He was armed with a screw driver. You can watch the video with caution and judge for yourself.

The police who responded weren’t usually called to respond to a crime, but were called by concerned family members, bystanders and neighbors because a person was acting erratically. 50 of them were outright threatening suicide.

In more than half of those killings, the officers who responded did not have adequate training in dealing with persons with a mental illness. Most of them actually responded with tactics that escalated the already volatile situation.

Yelling and pointing guns at a person with a mental illness is like pouring gasoline on a fire. A person in the middle of a mental crisis is not going to respond like someone else would, they have too much going on in their heads.

Almost a dozen of these individuals killed by the police were military veterans, many who suffered from post-traumatic stress disorder (PTSD). One was even a former California Highway patrolman who was forced into retirement after a severe beating during a traffic stop lift him suffering from depression and PTSD.

John Guillory, a 32 year old father of two had worked as a contractor in Afghanistan. He was having what his wife called a mental health emergency. He went to the Veterans Affairs hospital in Arizona, but was turned away because they were too busy. He went home and called 911 twice, hanging up both times. When the police showed up to his house he pulled a gun out of his waistband saying, “I bet I can outdraw you”. The police shot him six times killing him.

Suicide by cop is real thing and accounts for a number of these killings.

One individual in San Francisco who pulled a BB gun out on a group of officers and was shot and killed, had left a message on his phone telling the officers “You did nothing wrong. You ended the life of a man who was too much of a coward to do it himself.”

On average, police have killed someone who was mentally ill every 36 hours so far this year. Police are starting to acknowledge the lack of effective tools and trainings they have in dealing with this population. Without large-scale retraining and a nationwide increase in mental health services, these deadly encounters will continue.

While officers on average spend 60 hours in firearm training, they only spend 8 hours on learning to de-escalate a tense situation and 8 hours on handling mentally ill individuals. Otherwise they use tactics that are counterproductive and increase the risk of violence when they encounter these individuals. Most of these individuals end up dead within minutes of encountering the police.

Some of these killings probably couldn’t have been avoided. In some of the situations the individuals had guns pointed at the police. However, a large number of these individuals could still be alive if the officers had proper crisis intervention training.