I had never heard of the term gas-lighting until I was in a tumultuous relationship with a woman with borderline personality order who accused me of gas-lighting.   At the time I asked her what it meant and she told me to look it up, so I did and the more I read about it and researched it, the more I realized she was the gas-lighter and I was the one being gas-lighted!

Gas-lighting is a deceptive and insidious form of control and manipulation. The name comes for the 1938 play, Gas Light. People who are being gas-lighted are deceived into doubting what they know to be true through the use of false information. These victims end up doubting their memories, feelings, perceptions and nearly everything about themselves, including their own sanity. Overtime, the gas-lighter’s manipulation tactics become more complex making it harder for the victim to recognize and avoid. If this sounds like psychological warfare, that’s because it is.

Gas-lighting is most common and noticeable in intimate relationships, but they can happen in professional relationships as well. Gas-lighters are usually charming at first and often have personality disorders such as narcissism or borderline.  Many sociopaths and addicts are skilled gas-lighters as well.

Gas-lighters attack their victims most sensitive areas: their sense of identity and self-worth. Through my research and interviews with clients who were in toxic relationships, I found that it was common for gas-lighters to show one face to their victim and another to the rest of the world, making it hard for their victim to reach out to others in fear that no one will believe them.

In it’s most basic form, gas-lighting can be seen as projection taken to it’s highest level. The gas-lighter needs to create a certain reality by attempting to shape the reality of the person being gas-lighted. They will change facts in-order to create a new narrative more suitable for themselves and disregard their victims reality.

Gas-Lighting Can Be Used To Manipulate A Whole Society

Gas-lighting not only happens in day to day relationships, but historically has and is happening in a greater context. Think about how the narrative around Thanksgiving downplays the genocide of Native Americans, or how many American History books brush over the horrific slavery of and treatment of African Americans. Cultural appropriation and white-washing are both ways experiences and realities of others are overwritten, manipulated and downplayed. It happens so much in our society through the use of media and stereotypes that’s it’s not easily recognized, but is just as damaging to those who are the victims of gas-lighting.

I once read a book called Brainwashed: Challenging the Myth of Black Inferiority, that in many ways detailed how American Society has been gas-lighted to perceive African Americans a certain way.

One example from my personal situation is that the person I was dating continuously disrespected our relationship by flirting with other guys. Even other people who knew us would come and tell me and it became embarrassing. When I would talk to her about it she would accuse me of being insecure, other people of manipulating me and accusing me of looking at other women.

It got so bad that I started questioning if I was insecure, if other people were trying to sabotage our relationship and although I had never been accused of having wandering eyes before, I started to doubt that as well. I started becoming more aware of my behavior and attempting to never even look in another woman’s direction. I started becoming paranoid and questioning things my friends were telling me about her. I started to doubt myself so much that I became oblivious to the ways she was continuously and increasingly disrespecting me and our relationship.

That’s what gas-lighting does. It makes you start questioning your own reality to the point where you don’t trust what you know to be true.

How I ended up overcoming this was through some deep introspection and awareness. First,  thanks to her accusing me of gas-lighting (the gas-lighter often accuses their victim of being the gas-lightee), I became aware that I was actually being psychologically manipulated.

I had to regain trust in my own sense of self and judgement and realize that I wasn’t crazy and that my eyes and heart weren’t deceiving me. I had to find a way to separate myself from her and see the truth for what it was and once I did that, it was like someone had turned the lights on in a dark room and allowed me to see everything. I had to take back my power and it’s then when I decided to leave because I knew she wasn’t going to change and the new “woke” me, couldn’t stay in that toxic relationship and keep my sanity.

Despite the fact that I knew I had to leave, it still took multiple attempts before I was able to walk away for good. Toxic relationships are usually hard to leave and take several attempts.  During that time I did reach out to friends for support and I continued to read articles and books that opened my eyes and made me strong enough to eventually leave for good.

With the holiday season in full effect, a lot of people will be feeling anxious, depressed and/or lonely. Some will feel like they have no one to talk to. I’ve attached a list of some important numbers that I hope will help anyone who feels the need to reach out this and any time of the year. 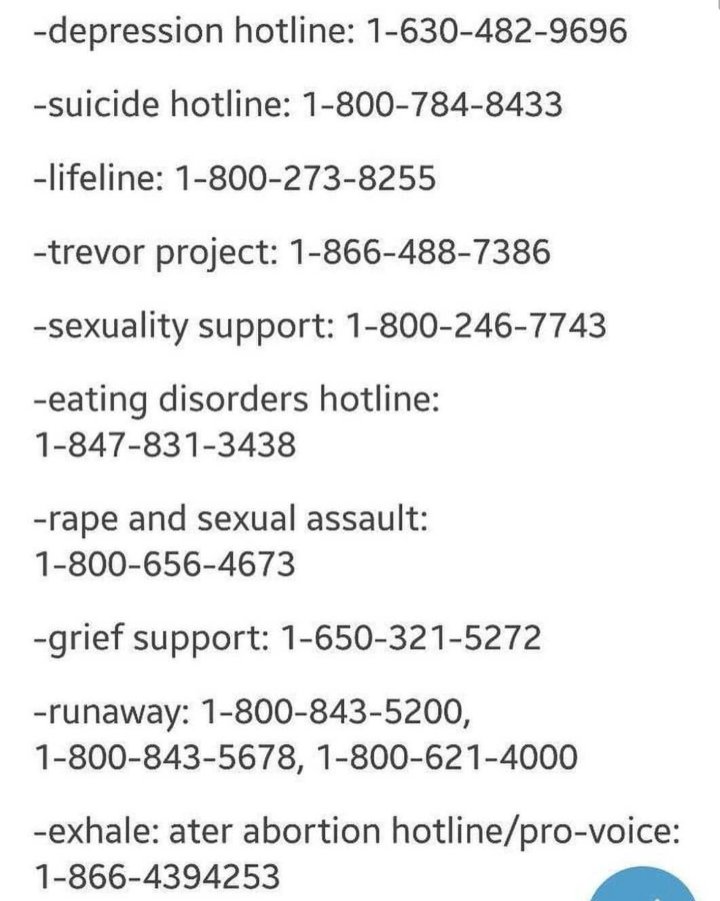 ***TRIGGER WARNING- This article contains information about suicide which may be upsetting to some people. If you or anyone you know is struggling with thoughts of suicide please call your local suicide hotline or visit http://www.iasp.info/resources/Crisis_Centres/

Suicide sucks. Plan and simple. It always seems to hit us when we least expect it and it always hurts. It doesn’t matter the age, the circumstance. It always feel like a life was taking before its time.

The last half of 2018 has been a helluva time for me. Over the past 6 months I have dealt with the deaths of five people who were either directly or indirectly under my care. One died of an accidental heroin overdose, the other four were suicides by hanging.

I have seen CPR performed heroically and tirelessly, but in vain on two of those deaths and it is an indescribable feeling to see someone I knew, someone I had spoken to earlier that day, laying on the ground motionless. Someone so young (one was in her twenties, the other in her thirties) and so full of life at one point, now lifeless.

Suicide is an unfortunate evil we have to deal with in the mental health field. My current job puts me in the role of dealing with suicidal patients all day long.

I am used to dealing with suicidal patients, even patients who attempt suicide or self-injure, but I am and never will be used to dealing with completed suicides. I take each death personally, even if professionally and ethically my staff and myself did everything we could to prevent it.

Suicide sometimes builds overtime and is the result of unbearable psyche pain. Three of the suicides, at least on the surface, appear to have been thought out. One woman was grieving over the loss of her sister and blaming herself for her sisters death. She was filled with depression and guilt she found insufferable. Another man was facing a lengthy prison sentence and decided he would rather die than go back to prison and spent years locked away. He was the only one who left a suicide letter behind. It was obviously something he had given some thought to.

Suicide, as we have seen too often lately, is sometimes the result of bullying, which appears to have been the case in the last suicide and another serious suicide attempt a couple of weeks after that one. Adults in correctional settings who are exposed to bullying are at high risk for suicide.

There weren’t any obvious warning signs that could have prevented any of these deaths. Accept for the accidental heroin overdose, these individuals seemed to have been determined, in those moments, to end their lives. I wish I could have saved them. I wish I could have saved them all. I cried after each of those suicides because I knew those individuals, maybe not terribly intimately, but as close as you can professionally under these circumstances.

I even thought about resigning because I felt like we failed them although multiple internal and external reviews showed that we did not. However, I know that for these five lives lost, there a countless numbers of suicides we have prevented. And that’s what keeps me going. That’s what keeps us all going.

When it comes to changes, most of us want to make big changes and see big results almost instantly. That’s why so many New Years resolutions and even regular goals fail. We only see the big picture and often get lost in all the effort it will take to see those changes.

What we should do however is focus on the little things. If we want to lose 30 pounds we can go on a crash diet that may work for a while only to see those 30 pounds plus some come back when we stop the diet, or we can start small by reaching for a glass of water instead of that soft drink, walking for 10 mins a day or adding more vegetables to our next meal instead of foods high in carbs.

If we want to save money we can get frustrated with the amount  we want to save and how little extra money we feel like we have to put towards that savings, or we can decide to put away an extra $10 here or there, to cancel that subscription to Spotify or to start bringing our lunch to work or cooking at home to save money.

In both scenarios, before you know it, because it didn’t take an extraordinarily amount of effort,  you will be inching towards your goals and likely will have found the motivation to increase your efforts, even more.

Think about the stories we hear of successful basketball players like Kobe Bryant who spend hours in the gym shooting free throws or three pointers just so when they make the “big shot” in the game it’s really just a series of small things that have come together.

Recently I watched a documentary on body builder and 8 time Mr. Olympia Ronnie Coleman. For years he competed, but never won the Mr. Olympia title until one night, just before the show, with hesitancy, but with the urgency of another body builder, broke his routine. He was encouraged to relax, to have a drink and even eat some pizza. He was simply encouraged to not be so serious. The next morning he woke up and won the Mr. Olympia for the first time and he said he believes it was because he was so relaxed and allowed himself to have fun. Something so small ended up changing his life.

We all have changes we want to make and many people do not make those changes because they get lost in the totality of it all. Start small, put one foot forward and then the next. Before you know it you will have reached a goal you may have thought impossible or at least have gotten yourself further than you ever thought you could.