I was honestly shocked the other day when on the local news I saw a report that the Florida Board of Education, just passed a new race-based standards of academic acceptance which will affect all of the 2.6 million students that are in the state’s public school system.

I was shocked because I don’t remember hearing about this, and yet it has passed. Apparently there was no vote on this from the public and I was even more shocked to hear what the standards are.

The new academic standard says that by 2018, 90% of Asian students, 88% of white students, 81% of Hispanic students and 74% of black students are to be reading at or above grade level.

It also states that 92% of Asian students, 86% of white students, 80% of Hispanic students and 74% of black students will be at or above their math grade level.

Now some people will say that this is a part of Affirmative Action, but I’d like to argue against that. This is part of goals required from Florida’s waiver of No Child Left Behind. State officials say that these new standards take into account the performance numbers of current students of color.

I say that this is a way the state can take the blame away from where it really should be, and that is on failing schools, inequality of schools and teachers in different communities, poor teachers, bad parenting and failing community services and supports.

It is unconscionable to me that we would expect less of a child based on his or her race/ethnicity. All kids have the ability to learn regardless of race or ethnicity.

It is true that often things such as socio-economic status and parental educational background have a lot to do with a child’s academic performance, exposure and experiences, but to dumb down the expectations of a child based on their race/ethnicity is really backwards.

And where is Florida getting this idea from? Virginia! No offense to Virginians, but Florida is following in Virginia’s footsteps when it comes to educating their students. Some say it’s so that black and Hispanic children won’t feel bad when they don’t perform as well as their white and Asian counterparts. Really?

When I was in high school I had to pass a competency exam to graduate, my race/ethnicity played no part in this. I was expected to get the same passing score as everyone. They same went for the exit exams I took in undergrad and graduate school.

Former Florida Governor Jeb Bush even said that this would send a “devastating message” that Hispanic and black students aren’t as capable as other students.

Palm Beach County School Board Vice-Chair Debra Robinson said she’s “somewhere between complete and utter disgust and anger and disappointment with humanity” because of this.

We do a disservice to our kids when we are basing academic standards on race/ethnicity. We will be placing a black mark on the high school diplomas of every black and Hispanic child.

It would be better to track students individually and not group them by race/ethnicity, but that would cost the state too much, so it’s easier to just make generalized, in my opinion, racist academic standards of achievement.

A long time ago I read a book called The Bell Curve and thought it was the most racist piece of garbage I had ever read. It was largely about whites intellectual superiority over blacks. This isn’t much different.

How can black and Hispanic children feel good about their academic achievements if they are held to a lesser standard, especially in elementary, middle and high school where these poor standards are setting them up for future failure?

In elementary school I always made the honor role until one day I got a “C” and cried. My teacher consoled me by saying “C’s are good for a boy”. After that day, I never made the honor role again until the 11th grade. I was happy with “C’s” and it was only until the end of my sophomore year in high school that I started making all A’s and B’s again.

What changed? I did, not the academic standards, or even the school or teachers, but me.

I learned that “A” stood for excellent, “B” for good, “C” for average, “D” for poor and “F” for failure. I told myself I was above average and aimed to never get below a “B” and from that point on in high school, through undergrad and graduate school, I didn’t.

With Affirmative Action, yes it helps minority students get into college with lower exam scores than whites and Asians, but once in college they are expected to keep up or get out. There’s a difference between that and this.

If we tell our kids it’s okay to be below average because of your race/ethnicity, I think it will have the same affects. Kids won’t try harder, they will accept poor performance as “good for my race/ethnicity”.

Those black/Hispanic kids that are high achievers, will never feel the pride they should feel.

We already have a problem with black/Hispanic kids being stereotyped as “not as good as” whites and Asians, but this is almost like making it official.

We all learn differently and EXPOSURE and EXPECTATION go a long way to defining a child’s self-efficacy. This is not the way of solving a problem, but creating one we all will have to deal with in the future.

Politicians are always saying that they want our nation to be at the top when it comes to math and science, but I guess that doesn’t apply if you are black/Hispanic. We should be encouraging, educating and encouraging all students, regardless of race/ethnicity, to do their absolute best, and not a percentage of what is considered the absolute best. 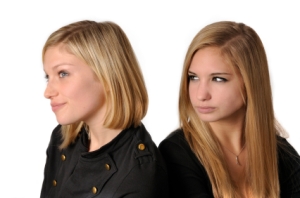 It’s very early in the school year and one thing I’ve noticed is that more and more of the students that are getting referred to me for counseling aren’t the typical “bad apples” or “lost” kids, but kids who are good students, are never in trouble, yet are miserable.

How miserable? One cuts herself and thinks about suicide often. Another felt disappointed when she found out she wasn’t pregnant because she thought being pregnant would make her feel alive and purposeful. And one is so depressed that despite appearing to have everything a 17 year old high school girl could ask for, she mopes around campus with her head down.

What do all these students have in common besides being female? They all have a sibling that they are constantly being compared to. A seemingly perfect sibling who makes their accomplishments appear minor in comparison.

These are students, who compared to most other students on campus, are successful. They have mostly A’s and B’s and no disciplinary infractions, yet when compared to a sibling who is making straight A’s , serving as class president and maintaining a thriving social life, they feel inept, especially when their parents are the ones constantly drawing the comparisons.

These students, despite doing their best, are never recognized for it since their best pales in comparison to their sibling’s best. They are often left feeling as if they aren’t good enough and have a diminished sense of self, while the favored child can begin to feel a sense of being special and entitled, often making the less favored child feel even more diminished.

Adolescents tend to be even more sensitive to favoritism by parents than younger children, since they are trying to redefine themselves from being a child to being a young adult.

In doing this they often distance themselves from parents and even have created some tension as they struggle for independence, yet they still want the approval that came along with childhood, approval that the more favored child usually still gets and it can create resentment.

What makes parental favoritism especially harmful is when it is intentional and creates preferential treatment and superiority/inferiority between children.

The disfavored child may begin to believe that they are indeed not as deserving, as good or as smart as the favored child and that could lead to a life time of self-esteem and psychological issues as well as bitterness towards the parents and the other sibling.

So far the students I’m working with, besides complaining about the favoritism and anger towards their parents and sibling, show profound anxiety, depression, self-injurious behavior, low-self-esteem, anger, suicidal thoughts, decrease in self-efficacy and drug use.  And these are the “good” kids.

Imagine if they were kids with more disadvantaged backgrounds and more complex psychosocial issues. They could be drop outs, delinquents, heavy drug users, you name it.

There are many different ways parents can show favoritism, including showing inequitable pride, attention and approval to one child, to giving the favored child more freedom and rewards.

At times parental favoritism isn’t done on purpose. It is actually very easy to unintentionally start showing favoritism to one child over another.

Parents need to start recognizing, listening to and accepting when one child is claiming to be treated unfair so that they can analyze the situation.

While sometimes it may seem like the child claiming to be treated unfairly is just nagging, they are often trying to tell the parent that they want some attention or are feeling left out.

The period of adolescence is hard enough, the last thing a child needs is to feel discriminated against within their own family unit.

The Wellness Warrior
A Skirt on the Mat