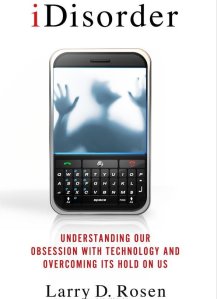 I first heard of the word iDisorder when I came across Larry D. Rosen’s book iDisorder: Understanding Our Obsession With Technology and Overcoming it’s Hold on Us.

While iDisorder is a fairly new term, the idea that our constant and immediate availability to technology causes signs and symptoms that mirror those of some psychological disorders, isn’t.

Most of us have almost immediate and continuous access to either email, our smart phones, our computers or our tablets and often at the same time, using one device to do multiple things like answering phone calls, sending emails, receiving text messages and surfing the web. The thing is, while we use these devices in attempts to control our environment by making everything in immediate access, we also began to become dependent on them.

How many of us have our smart phone with us all the time? Even while on a date or at the dinner table with family we have it next to us, often without thinking, checking text messages or emails instead of being present and engaging with the people right in front of us? Some people find it rude if you are staring at your screen and tapping away instead of making eye contact with them, but it happens so often that I dare to say it is becoming almost socially acceptable.

I remember one time at a restaurant I was people watching as I often do and I saw a couple that looked like they were out on a date, maybe a first date, but instead of sitting across from each other talking, they were both tapping away on their phones and didn’t speak to each other for at least twenty minutes as they waited for their food to be served. At that same restaurant I observed four young ladies all out to dinner together, none of them talking to each other, but all four focused in their smart phones.

There is no doubt that our devices makes it easier for us to get and stay connected with people we might only otherwise communicate with sparingly, but what about the present and those around us. Are we missing out on real life by being too focused on virtual lives?

I have friends who would rather play games on their devices than actually play games with and be around real people. Recently I was co-presenting with another counselor and when I went to turn the presentation over to her I was shocked to see she was texting on her phone. I had to stall until she came back to the here and now. I later asked her what was going on and she laughed it off, saying that it was a text message from one of her kids, nothing was wrong, but she was so used to reading and responding to their text messages that she didn’t think about it even when we were standing in front of hundreds of people.

We get so used to our phones buzzing with phone calls, text messages, emails and other notifications that even when they aren’t going off, our mind is anticipating them going off so much that it triggers our mind and body to think that we feel our phone buzzing in our pockets. These are called phantom vibrations. It’s crazy, I’ve experienced them before and I am sure most of you who are frequent cellphone users have as well.

How many of us are so dependent on our devices that we feel lost without them? Ever leave your house and accidentally left your cell phone? How did you make it through the day or did you turn back around and get it? How many accidents are caused because people are driving and texting. It’s as if that text message has to be read and answered despite the fact we are already engaged in the dangerous activity of driving. Ever watch people who’s smart phone battery is about to die and thy don’t have access to a power source? It’s like watching a drug addicted desperately searching for a fix.

I see kids all the time getting in trouble in school for having their smart phones out, even when they know they aren’t supposed to. And trying to take the phone from them? You’d think you were trying to take a kidney. They throw tantrums, even at times become hostile and risk suspension or worse over a simple device. Can we say addiction?

In his book, Larry Rosen goes on and on connecting our access to technology to things like depression, narcissism, ADHD, hypochondria, voyeurism, eating disorders, anti-social behaviors and a host of other psychological disorders.

On top of that, in teenagers I think it retards their spelling and writing abilities. I’ve seen in teenagers writing that some of them have become so used to short hand text messaging that their spelling suffers and they don’t know when they are writing papers that you can’t just put IMHO when you mean in my humble opinion or txt when you mean text. It’s crazy, but true, so many of the teenagers I work with don’t seem to know when it is and isn’t appropriate to use that type of short hand. One of my teenagers, a very intelligent junior, once wrote me a personal letter I had to decipher. If I didn’t know her I would think she couldn’t read, spell or speak proper for that matter.

The thing is, you can become addicted to anything used in excess and one of the hallmarks of addiction is denial.

As a side note, if you ever have a house party or get together, you may want to thank about banning smart phones as people tend to pull out their phones, start texting, playing games and surfing the internet instead of actually engaging in conversation and activities with people around them.

It is a good idea for us to unplug every now and then, even if it’s just for a few hours. Put away the cell phone, the tablets, the computers and connect with real people and be present. That would be some thing great for a family to do together although your kids may throw a tantrum at the thought. I think it will help keep us grounded and appreciative of who and what we have surrounding us.