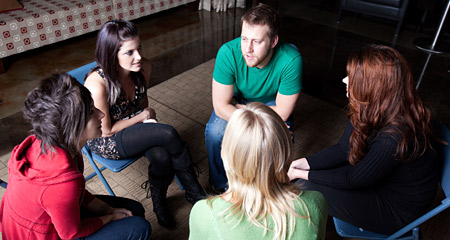 College can be a huge transition for students that usually leads to personal growth, but at times may lead to feelings of loneliness, anxiety and depression.

Many students who I’ve worked with in high school and have graduated and gone off to college, have kept in touch, expressing at times their struggle to adjust or to stay balanced.

Usually I’ll give these students some words of advice or resources I think will help them get back on track, but sometimes they need more attention than I can provide and that’s when I often refer them to a support group on their campus.

There are usually support groups for almost any and every issue a college student may be dealing with including:

Sudden independence, academic pressure, financial worries and adapting to a new environment are all things that can lead to stress and anxiety, especially among freshman.

Stress and anxiety can lead to depression which can cause a host of other problems including dropping out of school and substance abuse. Most college campuses offer groups such as “Personal Growth” or  “Transitioning into College”  to serve students with these needs.

There are also grief and loss support groups for students dealing with the loss of someone.

In college, people often start discovering new things about themselves, things they may like, dislike, feel uncomfortable with or are not quite sure of  how to deal with their feelings. This is also the time some people have their first sexual experiences either with the opposite sex or with the same sex.

Some may feel like they don’t fit into the student body on campus for various reasons.

These groups help people suffering with self-esteem and identity issues figure those things out in a safe, confidential environment.

Most college campuses offer support groups, for example, for the gay, lesbian, bisexual and transgender community and for people who have been sexually assaulted. The University of Central Florida, for example has a group called Sister Circle, which gives support to women of color.

There are also groups for students dealing with drug and alcohol problems in order to help them stay on the track of recovery. In recovery, it’s very important that a person has a good support system, which is what these groups attempt to provide.

Here is an example of support groups offered at the University of Central Florida and similar groups are found on most college campuses:

Generally once I’ve connected a student to a support group on campus not only do I feel relieved, but they also tend to improve and make new friends. I’ve always been a proponent of support groups for everyone in need because I know the positive affects they can have on their members.

One thought on “Support Groups for College Students”