Urban Outfitters came under fire after it began selling this shirt that has “depression” written all over it as if depression was something to be advertised. For Urban Outfitters to initially not see anything wrong with this (they have since pulled the shirt after public outcry), shows how much society has not only minimized mental illness, but even romanticized it. Granted, Depression is the name of the clothing company out of Singapore, but Urban Outfitters no doubt knew that they were pushing the envelope when they decided to sale the shirts in their stores.

This isn’t the first time urban Outfitters has come under fire for tasteless shirts. In 2010 they had a shirt that read “Eat Less” which seemed to make light of eating disorders, and another one that read “Syringe Shot Shooters” which addiction organizations protested.

The problem with shirts like this is that they minimize and make light of serious disorders and addictions. They also make it seem “cool” to have these issues.

You don’t know how many young girls I’ve worked with who are “cutters” and while most of them had some mental instability behind their self-mutilating behaviors, at least some of them did it for attention and because it made them seem complexed. The same is true with some of the depressed teens I worked with. Some of them were indeed truly depressed, but some of them carried around the bleakness and darkness like a badge of honor.

It also, in my opinion, takes some of the responsibility away from people who have these issues and then broadcast it with these types of shirts. The type of people who would wear these shirts aren’t saying “I’m depressed and I am fighting it with all my might”, but “I am depressed so excuse my darkness”.

People who truly suffer from these disorders and addictions don’t advertise it. Teens I see who seriously self-mutilate attempt to hide it, cutting in places you wouldn’t even think of and wearing excessive clothing to cover their scars. People I’ve worked with who suffer from eating disorders hate the disorder and the fact that they have to fight it everyday or risk dying or causing other serious medical issues to themselves. How are these people supposed to feel when their condition is being advertised and sold on a t-shirt? How is it supposed to make society take their condition seriously? 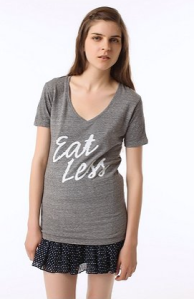 While these shirts may seem harmless, they are not. They are sending some hidden and unhidden messages to the public which can be dangerous. Shirts that say “Alcoholic”, “Crack Head” and “Suicidal” may seem harmless and even amusing to some, but for people who actually suffer, know or worse, have lost someone to those conditions, it is not funny.

Watch the documentary The Bridge which is a film about suicides committed by people jumping off the Golden Gate Bridge in San Francisco. You won’t see anyone who jumped to their death wearing a shirt advertising their pain or issues. Mental illness is nothing to glamorise. It is not something that can be fixed by giving someone a little more attention, but instead it takes hard work and dedication by both the person suffering from it and those that love them, including professional help and sometimes medication.

The best thing that I’ve seen come from this situation is the public outcry, for society to say that in the face of all the recent tragedies that have been linked to mental illness, we will not make light of it and forced Urban Outfitters to remove the shirts. Now only if Urban Outfitters and other companies that sale similar shirts would think about humanity more than profitability.