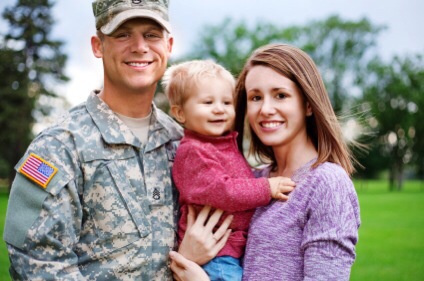 I’ve written before about the affects of war on our veterans. About how on average 22 veterans kill themselves everyday, many suffering from post traumatic stress disorder, traumatic brain injuries, physical injuries, substance abuse, depression and other mental stressors. However, what is rarely talked about is wars toll on the families of veterans.

Many military spouses, children, even siblings and parents end up suffering when their loved ones are deployed and sadly, many of them end up killing themselves as well. Exactly how many is unknown as that record is not yet being kept the way the number of veterans who commit suicide is, yet it is an issue that needs to be tackled.

Deployment after deployment can take its toll on any veteran and his or her family. The fear, trauma, uncertainty, pressure and strain can be too much for some of them to bear. Many are left feeling exhausted, isolated and desperate.

Multiple deployments can leave a family feeling despondent. Many families end up emotionally and financially shattered as they take care of injured veterans with physical and or emotional wounds that can take their toll over time. Some are so grief stricken over the loss of a loved one at war, that they themselves can’t stand to live.

I am not saying that stress, plus deployment equals suicide. Suicide is much more complicated than that. The combination of reasons a person commits suicide is different for each individual. There are many military families who deal with war, injury and death fairly well and show great resilience.

However, when it comes to suicide there are usually many underlying factors such as a wife who was already depressed and gets extremely depressed when her husband is deployed. Alone and depressed, she may be more tempted to take her own life.

Many family members get severely depressed when their loved one is deployed, but fail to seek mental health help out of fear that it will jeopardize the career of their loved one. After all, they are supposed to be the strong ones, supporting their family members at war. However, they too suffer.

Many who sought help felt like they did not get adequate treatment. Some confided in their doctors only to receive medication with no counseling or follow up care.

Take Faye Vick for example, a 36-year-old Army wife of a newborn and 2-year-old who killed herself and both kids by asphyxiation in her car while her husband was deployed.

Cassey Walton, a wife of an Iraq vet who killed himself outside his home in 2007, shot and killed herself just days later wearing her husbands fatigue jacket and dog tags.

Monique Lingenfelter, the wife of a sergeant, barricaded herself in her home and killed herself and her baby despite police trying for hours to persuade her to come out.

Sheena Griffin told her husband while he was away at Fort Hood preparing to be deployed to Afghanistan, that she wanted to kill herself and their 8 and 9-year-old sons. By the time he called police and they arrived to her house, the home was already engulfed in flames and Sheena and her two sons were both dead.

And then there is Jessica Harp who wrote a nearly 4,000 page suicide letter that went viral, detailing how her marriage had deteriorated after her husband served in the war.

According to Harp, her husband came back changed, drinking, impulsive and most likely suffering from PTSD. She said that if her husband had died she would have been surrounded with support, but because he wasn’t dead physically, but wounded mentally, there was little to no support and the weight and emotional strain was too much for her to bear.

Harp didn’t kill herself. Her letter was preprogrammed to be sent out, but she ended up in a local hospital instead of killing herself.

Melinda Moore, a researcher at the University of Kentucky says, “The service member is like a pebble in a pool, the pain a person carries affects everyone around them. Trauma ripples outward.”

You can see these affects on their spouses, their children, other family members and even friends before, during and after deployment. War has a way of changing people. The person who left isn’t always the person that comes back and this has an affect on the entire family unit from parents, to spouses and kids.

The number of military family members who have killed themselves or attempted to kill themselves is unknown, because it isn’t being tracked, something I hope will change soon. In 2009 there were 9 confirmed suicides of service family members and “too many to count” attempted suicides in just the army alone according to Army officials.

The way we treat our veterans who come back from war has to be holistic, meaning that we treat not only the veterans, but those are are closes to them as well in order to keep families together, people mentally health and a live.

If you or anyone you know who is a family member, spouse or even friend of a service member and you need help, here’s a list of resources.

Military OneSource- provides counseling referrals and assistance with all needs of military life including mental health: 1-800-342-9647

2 thoughts on “The True Toll Of War”