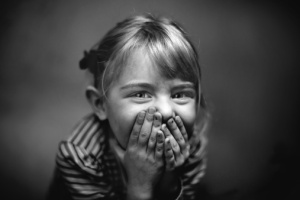 The other day I was speaking to a mother who was describing her son’s symptoms to me. She reported that he had difficultly and sometimes just couldn’t speak at all in various social situations, especially at school and around strangers. He had been tested for Autism and that was ruled out. She was very frustrated with her son, but also felt bad for him because she could tell that he was also in distress. She just couldn’t understand why her son would suddenly become mute in social situations when he was such a funny, outgoing and talkative kid at home.

After listening some more, I realized that her son did not have an autistic spectrum disorder as she still believed, but that he had what is called Selective Mutism.

90% of children with Selective Mutism also have social anxiety or social phobia. While many parents initially think their child is faking or playing games, Selective Mutism is very painful and debilitating to the child.

Children with Selective Mutism have a real, paralyzing fear about speaking and therefore this totally impairs their ability to develop social relationships or to participate in social situations.

Not every child expresses Selective Mutism in the same way. While some children are totally mute in social situations, others can only manage to whisper while some will remain perfectlu still, seemingly unable to speak or move, while less severe children can manage to speak totally normal to a select few individuals in social situations.  This type of anxiety goes well beyond the normal range of shyness seen in other children.

A very select few children with Selective Mutism don’t appear to be shy at all. They actually do a very good job trying to mime their way through social situations.  In these children, Selective Mutism may be a symptom of something else, such as the child initially being mute and never grasping communication and are basically stuck in the nonverbal stage of communication.

Why Does A Child Develop Selective Mutism?

Most children who have Selective Mutism have a genetic predisposition to anxiety. This means that it is inherited. Almost from infancy on, these children may show severe separation anxiety, moodiness, frequent tantrums, inflexibility, show extreme shyness and have sleep problems.

Some children with Selective Mutism may have Sensory Processing Disorder (DSI), which basically means they may be sensitive to sounds and lights, and that they may perceive environmental and social cues differently than most people. They become easily frustrated, angry, confused, withdrawn or act out because the signals they are receiving from their brain are alerting them to danger and fear causing them to have anxiety.

Up to 30% of children with Selective Mutism also have a speech, language, processing or learning disorder which can increase their anxiety and inability to communicate effectively in social situations.

There is no evidence that abuse or trauma causes Selective Mutism, which is different from Traumatic Mutism.

In Selective Mutism the child can usually speak normally at least in situations where they are comfortable. In Traumatic Mustism, a child witnesses or experiences a tragedy so devastating that they can’t comprehend it, they stop speaking altogether in every situation suddenly.

Selective Mutism can progress to the point where the child stops speaking and becomes totally mute, but that is usually gradual and when negative reinforcements cause the child to slowly start limiting the places and people he/she feels comfortable talking to.

Most children are diagnosed with Selective Mutism between the ages of 3 and 8. Most of these children have already exhibited severe symptoms of anxiety. If a child stops speaking for more than a month than the parents need to take the child to a doctor.

Here is the diagnostic criteria for diagnosing Selective Mutism. Note that this criteria shouldn’t be the only criteria used to diagnose or rule out Selective Mutism since each child and case is different:

DSM-IV-TR (2000):
1. Consistent failure to speak in specific social situations (in which there is an expectation for speaking, e.g., at school) despite speaking in other situations.
2. The disturbance interferes with educational or occupational achievement or with social communication.
3. The duration of the disturbance is at least 1 month (not limited to the first month of school).
4. The failure to speak is not due to a lack of knowledge of, or comfort with, the spoken language required in the social situation.
5. The disturbance is not better accounted for by a Communication Disorder (e.g., stuttering) and does not occur exclusively during the course of a Pervasive Developmental Disorder, Schizophrenia, or other Psychotic Disorder.
Associated features of Selective Mutism may include excessive shyness, fear of social embarrassment, social isolation and withdrawal, clinging, compulsive traits, negativism, temper tantrums, or controlling or oppositional behavior, particularly at home. There may be severe impairment in social and school functioning. Teasing or goading by peers is common. Although children with this disorder generally have normal language skills, there may occasionally be an associated Communication Disorder (e.g., Phonological Disorder, Expressive Language Disorder, or Mixed Receptive- Expressive Language Disorder) or a general medical condition that causes abnormalities of articulation. Mental Retardation, hospitalization or extreme psychosocial stressors may be associated with the disorder. In addition, in clinical settings children with Selective Mutism are almost always given an additional diagnosis of Anxiety Disorder, especially Social Phobia is common.

Many parents, teachers and even professionals do not understand Selective Mutism because research is so limited. Many think the child is being defiant, controlling, that they are just shy and will grow out of it, or that they have some other disability such as autism.

When considering seeking treatment for a child with Selective Mutism, parents should be careful not to find a professional who believes that Selective Mutism is behavioral and about the child being defiant or controlling. These type of professionals tend to try to use punishment and forcing the child to speak as treatment, which consequently increases the anxiety of the child and worsens the condition.

Good professionals who understand Selective Mutism will focus on making the child feel comfortable, decreasing anxiety and helping the child learn coping skills to deal with anxious feelings. This is often done with a combination of therapy and medication and as a collaborative approach with the professional, parents and the school.

For more information and help, go to http://www.childmind.org