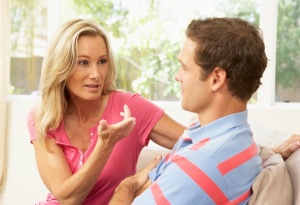 According to Urbandictionary.com, an emotional tampon is “a role taken on by a man in a ‘just friends’ male/female relationship. An emotional tampon is a man who will always be there to provide a woman with the proverbial ‘shoulder to cry on’ or some other outlet for her to otherwise vent her emotional frustration, problems and mental unbalance. Ultimately, he becomes the only person for whom this behavior is reserved as nobody else will tolerate it but him.”  -Gregory Prius

This especially happens when a man is trying to become more than friends with a female who has already delegated him to the “just friends” category. These men usually aren’t aware, or are in denial of their doomed state and think that being friends will lead to more, but it seldom does and usually ends up with many nights of listening to her complain about the no good guys she keeps seeing and trying to make her feel better after her heart has been broken again and again with hopes that their loyalty and and passion will be repaid with equal loyalty and passion, hopefully in the form of a real relationship.

The problem with being an emotional tampon is that this never happens! You get used and once she is feeling better, moved on to a different guy or got back with the same guy, you’re cast aside with no regard until her next period emotional crisis. This usually leaves the guy feeling jilted, bitter and angry towards the female, but usually he says nothing and is all too eager to relegate himself as her emotional tampon the next time she comes crying. These guys hearts are big, they are emotionally over available to an extent, but in the end, they are always left feeling fouled and unappreciated.

The Psychology Behind Men Who Tend to Be Emotional Tampons

These men tend to suffer from lack of self-esteem and confidence. They often are enablers and codependent. They often feel responsible for other people who should be responsible for themselves. And, they are dreamers. Nothing is wrong with being a dreamer, but it’s important to know when to let a dream go, especially when you are being used.

If you recognize yourself as an emotional tampon, you should just stop it! Yes, it’s that simple, stop it! Stop allowing someone to use you. Everyone is given one life and is responsible for it, not you! You are responsible for your own life and that’s it. It won’t be easy, we really care for and often times even love the women we become emotional tampons too, but it’s really just a fuzzy fantasy. It’s okay to be a friend and part of someones support system, but it’s not okay if that relationship is only one way and you don’t benefit from it at all. It will only leave you feeling used and emotionally drained. Save all of that energy for a woman who will appreciate your emotional availability and will reciprocate in one way or the other. Your days of being used for a few days out of the month and then thrown away until needed again are over!

16 thoughts on “Are You an Emotional Tampon?”