This past weekend on my way home at past 3 a.m., I saw a car on the side of the interstate with it’s hazard lights on. As I got closer to my exit, I noticed that it was four young ladies trying to change a flat tire.

This took me close to ten minutes and I thought for sure, by then either someone else would have stopped (the interstate was quite busy for 3 a.m.) or that they would have figured it out by then.

As I approached their car on the interstate, it was obvious that neither had happened.

I stopped and asked if they needed help, and they all said in unison “please”. So at 3 a.m. I got down and dirty and changed their tire. It only took about ten minutes and they were very grateful.

They commented that they had seen at least four police cars pass by and they couldn’t believe no one stopped to help them. They thanked me for rescuing them from being stranded and we went our separate ways.

This isn’t the first time I have been in this type of situation.

Once at a nightclub I heard a lot of commotion and saw a guy beating up a girl while dozens of people others by watching in horror. I fought my way through a crowd of people, thinking that by the time I got to that side of the club, someone else would have stepped in, but no one did.

I ended up being the one pulling the guy off the girl. I was shocked at how many others just stood by and watched.

A similar incident happened years later in a Walmart parking lot when someone was being attacked in their car by a guy. I heard the screaming, saw a crowd of people standing around and watching, and then noticed someone helpless was being assaulted.

I ran across the parking lot, thinking once again, by the time I got there someone else would have intervened, but no one did, and once again I ended up being the one pulling the attacker off of his victim while others stood around and watched (someone did call 911 but they didn’t get there for at least another ten minutes).

I am not recommending anybody should do either of the three things I mentioned above because it could have ended up badly, but it got me to thinking about why I felt the need to help in those situations and why do we in general, help others. 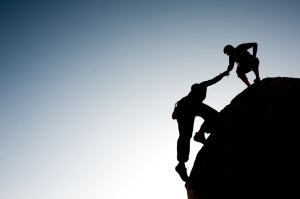 This occurs during times such as:

According to this theory, I intervened in the three examples above to be Superman, to rescue stranded, helpless individuals, and not purely for altruistic reasons.

Another psychological theory called negative state relive hypothesis says that we help to reduce the feelings of guilt we may feel if we didn’t help.

In the above scenarios, I agree that this may have been the case. Maybe I helped because if I didn’t, I would have felt guilty, if only briefly for not intervening when I could have.

Both of these are forms of egotistic helping, although other people benefited from my self-serving motives.

Other factors influence rather we are likely to help others or not such as:

We are also more likely to help those that we feel are similar to us. This is called similarity bias, a form of reflexive favoritism we usually don’t even know we are influenced by.

Lastly, according to evolutionary psychology, we help others because it’s in our DNA.

We help because we are all products of other humans who benefited from helping to ensure the continuation of our species. To understand this instinct we may call it altruism or morality, but it is ultimately instinctual.

If you look at helping this way, then all helping is egotistic as it serves to help pass on our genes as human beings to the next generation.

So why do we really help? Is it purely egotistic or biological? Chances are it is a combination of altruism, egotistic motives, situations and biological factors.

In the situation on the interstate, I know for a fact that I stopped because it was four attractive young ladies. I wanted to help because I knew it would feel good to be the savior, I was worried about their safety and would feel guilty if I kept going.

The next time you help someone, ask yourself why are you really helping? You may be surprised at the answer.

5 thoughts on “Is Helping Egotistic or Altruistic?”

The Bipolar Writer and J.E. Skye

The ramblings of an imperfect person.

“You don’t choose your family. They are God’s gift to you, as you are to them.” –Desmond Tutu