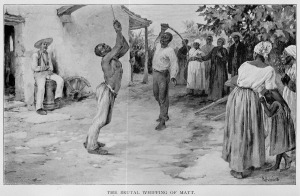 This is not a post about corporal punishment although it could be. However, with all the buzz going on about Adrian Peterson being charged with reckless and negligent injury after whipping his 4-year-old son with a “switch” that left severe welts and broken skin on the child’s legs, it had me thinking about why do so many Black parents whip their children.

Parents of many different races, culture and ethnicities whip their children, but as a Black man I was really curious to why do Black parents whip their children since to me, even the term “whip” reminds me of the history of slavery when slaves would get whipped by their slave masters. Seeing welts on a child’s legs, back or arms are subtle reminders of much worse whippings inflicted on those slaves.

So why then would a Black parent choose to whip their child?

I know this is a hot debate and many people believe that whippings keep children in line. Many people will say they are successful and not in jail today because their parents whipped them. I also know that many people are in jail or are troubled individuals not necessarily because of being whipped, but whipping didn’t seem to have the desired behavior modification it was supposed to and may have had adverse effects.

Each child is different and while one child may respond positively to whippings, another may become more violent, hostile, fearful and detached from their parents. I’m not shying away from punishment. There are a number of different nonviolent ways to punish a child.

I personally don’t believe in whippings. Growing up I may have been whipped two or three times, but I was never whipped as a default form of punishment, therefore I was never afraid of whippings. I was more motivated by not disappointing my parents and by rewards for good behavior, than punishment for bad behavior. I know that each child is different so I am not debating that.

However, I am here to educate. What many Black parents don’t know is that whipping our children is a direct syndrome of slavery.

Black people were unfortunately treated like beasts of the fields and whipped to discourage undesired behaviors. Black slaves were also used to whip and punish other Black slaves as a form of emotional and psychological warfare. Black slaves would be so afraid of the slave masters whipping their children for inappropriate behavior that they often would whip them first, hoping to save them from a much more severe whipping from the slave master.

This violent model became the only form of discipline that the Black slaves had to follow and therefore it was handed down throughout history.

During slavery, Black children had to learn very quickly the do’s and don’ts of being a slave on the plantation, or they would be beat severely or even killed by Whites, so Black parents whipped their own children to prevent this.

After slavery, the tradition continued. Blacks were usually punished more severely for committing social infractions than whites by teachers, people on the street, police and courts. Blacks were more likely to be beaten, thrown in jail or even lynched for minor transgressions so Black parents would punish their children severely through whippings in order to keep them from being punished by White society.

This was not down out of malice (although many parents have whipped their children out of anger), but out of love. The Black community felt a strong need to use corporeal punishment in order to keep their children from suffering potentially worst punishment from White society. Adrian Peterson was no doubt doing what was done to him by his mother and grandmother, and what was done to them by their parents, all the way back to slavery. He was doing what he thought would teach his son to stay out of trouble.

A lot of people will disagree with me about corporal punishment and I do believe that for Black people it served its purpose back in the day, but times are different. It’s time that we evolve and start looking for nonviolent ways to correct bad behavior.

For more information, check out the article Punishment or Child Abuse?