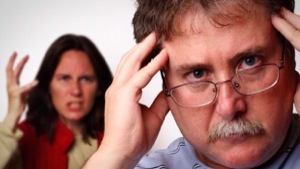 In life, we have enough to deal with with our own personal battles, the up and downs of everyday life and our own junk from our past and worries about our future. Still, most of us allow other people to dump on us, to put some of their battles, junk and worries into our already cluttered lives.

Most of the time we don’t even know this is happening and the people doing it to us are usually unaware as well. This all happens in our unconscious for the most part and is what is called displacement in psychology.

Displacement is an unconscious defense mechanism where someone transfers feelings of emotions, ideas or even desires unto other people or even objects. This usually happens in an effort to relieve anxiety, especially when it comes to things like aggression and sexual impulses.

Take for example, a wife who is sexually attracted to her boss and feels extreme guilt about it. She may come home and accuse her husband of being unfaithful, wanting to be with other women or even not finding her sexually desirable any more.

The wife will do this with so much emotional energy, that the husband will have no idea where these thoughts and feelings are coming from and will most likely do everything he can to assuage his wife and may even find himself stressed out although in all actuality, the situation has nothing to do with him.

The issue is not his, but he will make it is. He will take on all the emotional energy although it is not his in an effort to allay his wives feelings.

He may lose sleep about it and wonder what it is he is doing wrong.

A good clue that it isn’t about you is when the level of emotion is out of proportion to the situation.

Lets say you accidentally drop and break a dish, but your partner goes berserk about it or you come home five minutes late and your spouse is raging out of control over your tardiness. Chances are, they are displacing their feelings, be it anger, anxiety or whatever.

Emotions can be considered energy in motion. When people have a build up of energy, they have to find a way of getting rid of it or it will affect them in other harmful ways (depression, self-harm through drugs, alcohol, reckless behavior).

Often the easiest and even safest way to get rid of that pent up energy is to direct it at the people they love simply because they know that chances are you aren’t going anywhere.

Your husband can curse you out and you may fight, but chances are you will still be there tomorrow. If he curses the person he really wants to curse out, for example, his boss, chances are he will not have a job tomorrow.

In psychology we are used to this and call it transference. Most clients eventually will transfer or displace feelings unto us, rather its issues they had with their mother, their father, their ex-husband, or whomever we start to “remind” them of.

As a male therapist, when I worked in a high school, I used to get a lot of teenage girls who would displace their anger and fear about their absent fathers towards me and in therapy, we work through this. It is part of my job, but in the real world, it is usually much more difficult and frustrating to deal with.

In some of the worst cases of displacement, it can become abuses. Lets say a husband is angry with his boss, but he can’t hit him, so he comes home and unconsciously picks a fight with his wife and hits her, displacing his anger. This may eventually become his way of “dealing with” his anger and the abuse cycle begins.

Sometimes this can have a chain reaction. Suppose the wife, now hurt and angry, displaces her anger unto their child by hitting him and the child then goes and hits the dog.

It can be a vicious, unhealthy cycle.

Displacement is an amazing psychological deception and some people will do it just as much consciously as unconsciously.

Some people will purposely displace their anger, worries, whatever unto others so that they can either attempt to avoid their own feelings or to distract the other person from the real problem.

When this type of displacement happens, it can be more abusive than simple unconscious defense mechanisms at work.

Take for example a wife who really is cheating and her husband gets suspicious. She gets scared and instead of confessing, she very angrily accuses him of being the one who is cheating. He may get so caught up in her strong emotional energy that he feels guilty for his suspicions and ends up being the one trying to treat her like a queen in an effort to show her that she is the only one for him, all the while she has successfully distracted him from the real problem at hand.

So the next time someone yells at you, gets angry really quick or displays any other emotion that seems out of proportion to the activating event, before you allow yourself to get caught up in all that emotion, take a few seconds and ask yourself, “Is this really about me?”. Sometimes that’s all it takes to avoid getting caught up in a battle of emotion that is not yours to fight and prevent yourself from unnecessary stress.