In my original  post, Is Pretending to be Pregnant a Mental Illness, I discussed a high school teenager I have known for three, now going on four years, who has been “pregnant” every year and has had a “miscarriage” every year as well.

Last year was no different, but for some reason I believed she was pregnant, even when her closes friends did not. Still I remained skeptical, especially as the “pregnancy” went along and she didn’t get any bigger and refused to tell her mom about it.

Then summer came and I waited anxiously to see her when school started, knowing she should be close to her due time. Yet, when I saw her last week, she was no bigger than she was almost three months ago.

She told me that she had also “lost” that baby (big surprise), but now she is pregnant again and this time she isn’t making it up… and I believe her!

Why would I believe she is pregnant this time when she has lied about being pregnant four previous times?

Well this time she told me she told her mom, something she never did in her previous “pregnancies” even when I offered to talk to her mom with her.

Also, I know she has wanted to get pregnant for the past four years and so it was bound to eventually happen for real. I knew she was having unprotected sex with different guys.

And then today she showed me a picture of her getting a sonogram… a real picture this time and so yes, the girl who pretended to be pregnant for four years is finally pregnant.

It’s so sad because at 18 she is lost, she’s barely passing school, is extremely immature, admitted that her baby’s father is no good, that she doesn’t like him and her family doesn’t either, but yet they are bringing a child into this world.

There is no way she is ready to be a mother and yet, if everything goes right, she will be soon enough.

I’m concerned because this is a young lady with obvious mental issues and if she doesn’t get the help she needs she will raise a child who will potential have further issues because of being raised by an ill-prepared mother.

On top of everything, I really think this girl wanted to get pregnant to fulfill something missing in her life, maybe attention, unconditional love, purpose, who knows, and if having this baby doesn’t meet her conscious or unconscious expectations then where will that leave her and the child?

I see many mothers who had children for the wrong reasons (to keep a man, to fulfill a void, to prove that they can accomplish something, etc.) abandon their children physically, mentally or both when those expectations weren’t met.

Many of those parents end up abusing their kids, resenting them or being negligent in the way they raise their kids.

I’m not saying that this is definitely the case with this young lady, who knows? For a very few, having a baby serves as a catalyst to get them to step up and change their lives for the better so that they can be the best parent they can be for their child.

Unfortunately, that is rarely the case. Many impoverished, poorly educated, single, teenage moms end up dropping out of school and remaining in poverty. 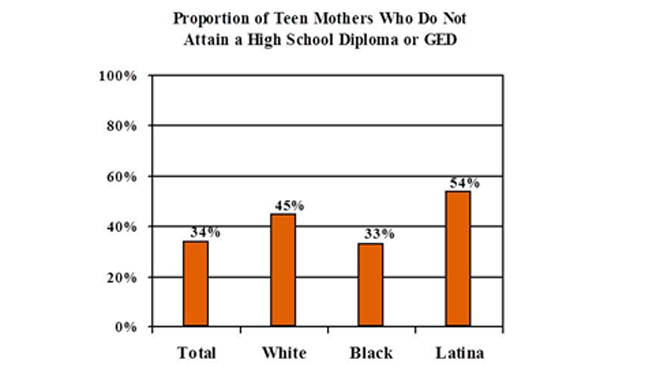