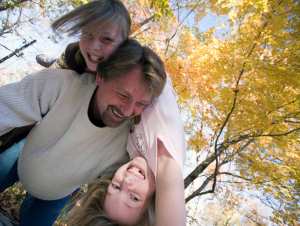 Father’s Day is coming up and I recently read a study out of the United Kingdom published in the journal Psychological Medicine that suggests that young girls who grow up without their fathers turn into depressed teenagers later in life.

It’s well known that depression tends to effect teenage girls much more than teenage boys and that trend stays the same throughout adulthood. New research is suggesting that when young girls  grow up without their fathers, the risk of depression increases with 23% of teenage girls showing signs of tiredness or sadness if they’re separated from their father before the age of five.

According to the study, it also makes them 50% more likely to develop other mental health problems compared to girls whose fathers remained in their lives.

Preschoolers are especially vulnerable with dealing with divorce and separation poorly because they generally do not have a support system of peers or family members.

I took a quick survey of five teenage girls I am working with who have been diagnosed with depression, anxiety, bipolar disorder, bulimia  and substance abuse and four out of five of them were abandoned by or separated from their father at an early age. Some through death, others through divorce or separation.

Many of the teenage girls I work with are suffering from “daddy issues” and are dealing with them in unhealthy ways. Some through self-hatred, others through drugs and alcohol or being extremely promiscuous and unstable in terms of dating and relationships.

Boys tend to handle absent fathers better according to the study, but I would like to suggest that they just express themselves differently and may not show signs of depression we typically look for. Instead boys may be angry, “troubled kids”, or become more withdrawn and reckless. I also think boys have more outlets to let out their frustrations through rough housing, sports and other physical activities.

Both older boys and girls tend to handle separation and divorce better with less instances of depression later in their teenage years, but working with teenagers I have no doubt that the effects of growing up without an attentive and active father are powerful and far reaching.

This is not to say that separation from their father at an early age definitely leads to depression in teenage girls. There are too many other factors such as economic  and social factors that also need to be taken into consideration. Also, girls tend to be more susceptible to personal negative events than boys which can lead to episodes of depression.

I think the take away from this research is not to stay in unhealthy or undesired relationships for the sake of the children because that can also have detrimental effects, but I think it suggests that we need to pay closer attention to young girls who have been separated from their fathers as parents and as those who work with children.

Fathers should stick around and be active in their daughters lives, even if the relationship with the mother has failed. A lot of time men think that they don’t have to be as involved with their daughters, but nothing could be further from the truth.

Mothers on the other hand shouldn’t gloss over the fact that their young girl is growing up without a father and should start looking for signs of emotional or behavioral stress or changes that may warrant attention such as individual, family or group counseling.

The most erratic and unstable young women I work with tend to be the ones who grew up without their fathers and I can only wonder that if they still had good relationships with an active and supportive father, if they wouldn’t be more stable and focused.